Whoever Makes the Most Mistakes Wins - Is it a Paradox?

Whoever Makes the Most Mistakes Wins - Is it a Paradox? 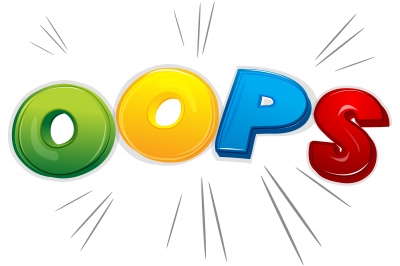 Image courtesy of digitalart via Freedigitalphotos.net

If at first you always succeed, don’t bother reading this!

Have you had a reaction in the dorsal anterior cingulate cortex recently? Not very pleasant, was it? Painful even. It’s the feeling that results from failure and could easily put you off attempting anything difficult in future. In the current jargon you could become ‘risk averse’ to ‘pushing the envelope’ and getting out of your ‘comfort zone’.

Counter-intuitively, perhaps, failing at something can actually present an opportunity. An opportunity to learn from your mistakes and succeed next time. But first you have to overcome that reaction in your dorsal anterior cingulate cortex.

You could get drunk. You could kick the cat. You could decide to farm alpacas in Burundi.

There is a less destructive, violent, drastic way. Start by internalising the disbelief that you actually failed and do some soul searching. Confide in an eternally patient friend (but not a friendly patient). Now work through the mistakes you made and how you will do things differently next time. Finally, look in a mirror and tell yourself to get a grip and move on.

Okay, so much for the wise words, let’s look at practical actions.

It was me what done it

If your mistake affects others, own up to it. Yes, your manager may display emotions you’ve not witnessed before because you ordered a year’s supply of left-handed tweed loop posterior pliers instead of two but better he or she knows straight away than finding it out when the invoice arrives. And don’t fudge it. Research published in Journal of Personality and Social Psychology found: ‘partial confessions made people feel worse than not confessing or fully confessing, a finding corroborated in a laboratory setting as well as in a study assessing people’s everyday confessions. It seems that although partial confessions seem attractive, they come at an emotional cost.’

Your manager will be less likely to banish you to the naughty step if you suggest a way to correct your mistake and you’ll feel better. For example: “I’ve spoken with our supplier and they’ve said if we return the excess instruments unused with an explanation of what happened, they’ll give us a credit note.”

In a similar vein, when Spike Milligan arrived late for active service in World War Two and the sergeant bawled him out, Spike said: “I’ll fight nights.”

Learn from your mistakes

In The Innovation Paradox (originally titled Whoever Makes the Most Mistakes Wins), Richard Farson and Ralph Keyes argue that failure has its upside, success its downside. They assert that failure and success co-exist and are even interdependent.

Woody Allen said: "If you don't fail now and again, it's a sign you're playing it safe."

Learning from your mistakes is important and to do so you need to ask yourself some questions such as:

What was I trying to achieve and was it (in hindsight) too ambitious?

Where did I go wrong?

Did I lack the necessary skills and or knowledge to achieve the task?

Depending on how you learn best, you may wish to write these questions with your answers or ‘bounce’ them off a friend or colleague.

Don’t be halted by your mistakes. Consider your answers to the questions above and decide a plan of action (again, you might need the help of a friend or colleague).

Your plan may include getting more practice at the task – booking appointments is second nature to your receptionist but maybe you need a few more dummy runs to get it right.

Your plan may include additional training. You thought you’d grasped the system for ordering supplies but perhaps the practice manager should take you through it again.

Your plan may include extra supervision. Since incorrect filing of patient records can cause major problems perhaps someone should check your accuracy until you consistently achieve 100 per cent.

Your plan may include timing the trickier tasks for early in the working day – research published in Neuroimage found that brain volume is greater in the morning.

When you do something well hug your colleagues, pull your top over your head and then have them chase you around the practice…

If you enjoyed reading this blog, tell me, tell a friend and tell everybody you know on social media. Please don’t let me feel a failure.